I’ve never been a thrill seeker, at least when it comes to amusement parks. While I’ve slightly expanded my joyride repertoire, I still prefer my feet on the ground, and an ice cream cone in my hand.

“Keep that ground where I can see it!”

One time, when I was very little (…ok, I was 14), a group of friends dragged me onto a ride at an amusement park. It was a big platform that was connected to a giant sun by a very long arm, which would rotate around the sun to a height of (by my estimation) ten thousand feet. Apparently, my face looked something like a mood ring before I fainted on my friend, woke up, and nearly threw up Exorcist style. But my buddy Jim squeezed me tight with one arm and cupped his other hand over my mouth and screamed bloody murder until the technician stopped the ride early. I almost died. I mean, I thought I was going to. But I didn’t. My friend was there for me, and after we got off the devil’s slingshot, we had a really good time. In Little Elliot, BIG FUN, Elliot and his friend Mouse go to Coney Island to see the sights and ride the rides. Mouse wants to go on the wet rides, the dizzy rides, and the fast rides! Poor Elliot is not up to it. Even when he tries to take it easy, the chaos of Coney Island sends Elliot on a pandemonious misadventure and Mouse on a wild goose chase.

Life presents us with many rides. Some are more inviting than others. Sometimes we have to get on rides that we don’t want to get on. While it’s great to have friends around to have fun, it’s these scary times when we really need friends close by. In this book, Little Elliot and Mouse continue to show us what friendship is all about, but this time they also show us great courage. Elliot musters the courage to face his fears, while Mouse has the courage and patience to be there for him. 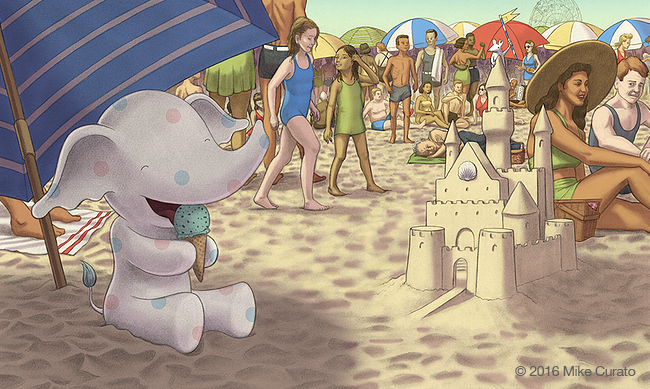 Like Elliot, I have been afraid of lots of rides, both at the park and in my life. I’ve been very blessed to have many friends who double as heroes. I hope that I have been able to return the favor from time to time. It’s important to know that you’re not riding this roller coaster alone. We need to be good friends and hold each other’s hands…and maybe also a vomit bag. 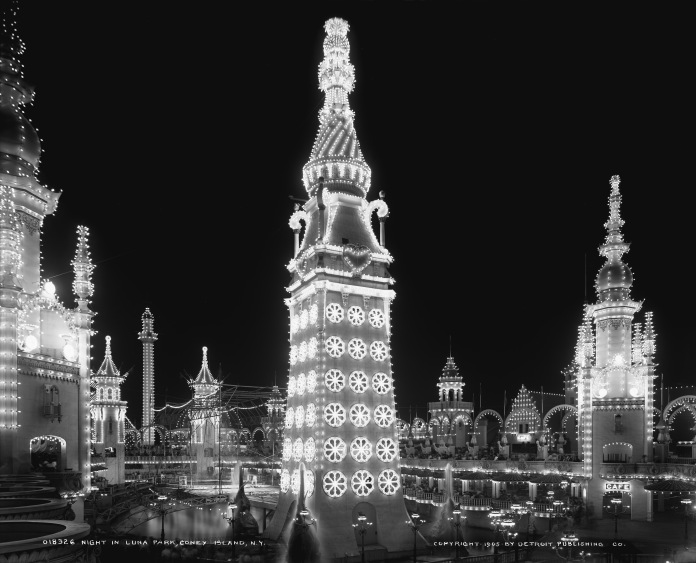 While I was doing research for Little Elliot, Big City and Little Elliot, Big Family, I looked at many photos and films ofNew York City during late 1930s and early 1940s. Eventually, I stumbled upon Ken Burn’s documentary, Coney Island. After watching it, I knew exactly where Little Elliot and Mouse should go next. The old film clips are totally mesmerizing. Nothing quite says “summer in New York City” like Coney Island. I love living vicariously through Elliot, who gets to see an enchanting world that is lost to us.

Coney Island was once a skyline of towers, turrets, and minarets. At its brightest, it was the product of visionaries that transported its visitors to a world of dreams and possibilities. It was, in its way, a wonder of the world that showcased the very heights of humanity’s imagination and innovation. At its darkest moments, Coney Island was scandalous, financially ruinous, and even morally reprehensible. It’s eventual downfall reminded us that joy is fleeting. Little Elliot, Big Fun walks the tightrope of hope and fear, and Coney Island is the perfect backdrop.

It was a lot of FUN making this book, and also a lot of WORK! I did more research for this book than Big City and Big Family combined! What made it extra challenging is that not much of the Coney Island of that time still exists. The boardwalk was plagued by fires, while other parts of it were demolished by a certain opportunistic developer. In the early 20th century, Coney Island consisted of three large amusement parks: Luna Park, Steeplechase, and Dreamland, plus many small independent rides and stands. Most of what you see in BIG FUN is based on Luna and Steeplechase, while Dreamland burned down in 1911 (a real shame because it was truly enchanting and I would have loved to have drawn it in the book). It was challenging deciphering blurry vintage black and white photographs, and then trying to envision what a scene might look like from a different perspective.

Some iconic rides still stand, like the Parachute Jump (which is just decorative now), the Cyclone, and of course the Wonder Wheel, which is at the very height and heart of our story.

I went to Coney Island several times to take photos and enjoy the sights, sounds, and smells of the boardwalk. 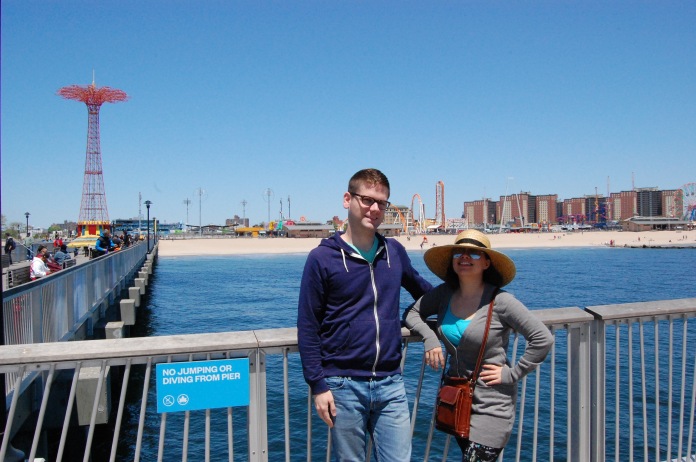 Dan and Katrina on the pier with the modern day boardwalk behind them.

Katrina and I ride the Wonder Wheel!

Aside from the documentary I mentioned earlier, I also watched many films featuring Coney Island, including Speedy, The Devil and Miss Jones, Enemies: A Love Story, and for some added levity, The Warriors. 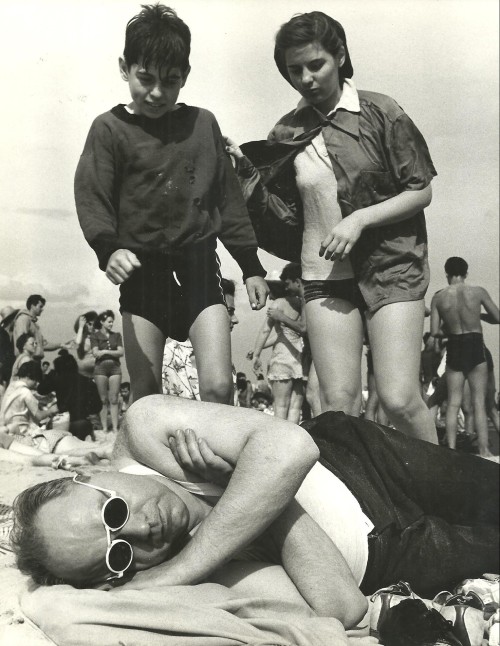 I looked at many photographs, and my favorites were by Morris Engle, which I certainly reference in some illustrations in the book. 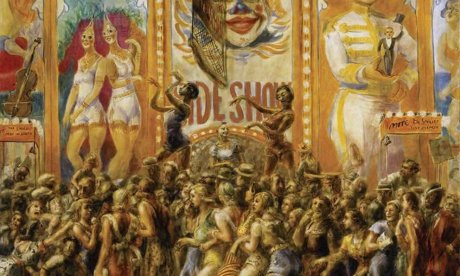 I also looked at many artists, including Reginald Marsh, Paul Cadmus, Harry Roseland, Benton Murdoch Spruance, plus many other nameless illustrators who created posters and other advertisements for Coney Island.

I’ve hidden away a few surprises in the book as a thank you to some of my friends who have been there for me when I’ve been afraid.

This Berger’s Burgers billboard is in honor of my friend and queen of wordplay, Samantha Berger, who I am making a book with soon! 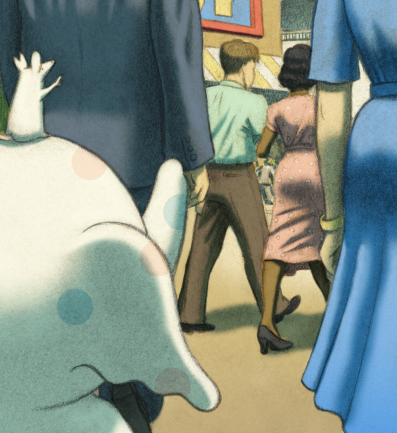 This lovely couple is actually Flora and Henry from Martha Brockenbrough’s The Game of Love and Death. 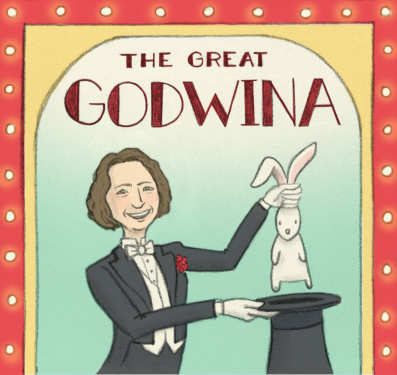 There is a portrait of my magical editor, Laura Godwin, in the endpapers… 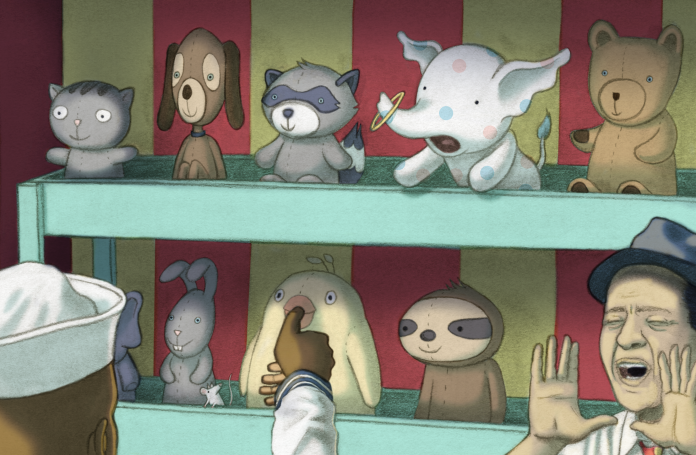 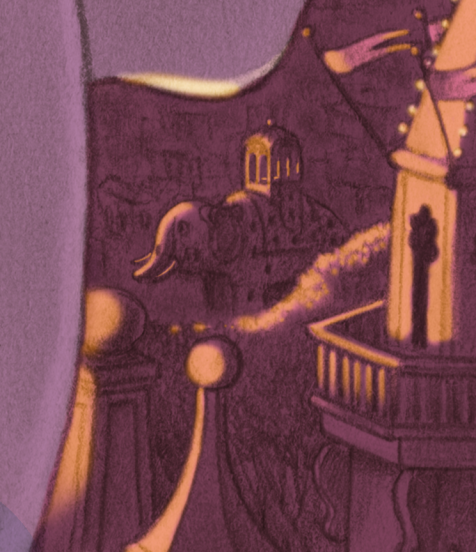 Don’t miss the double gatefold towards the end of the book! On the right side page, you’ll notice an elephant standing amongst the buildings. Well, that is also a building! In fact, it is the Elephantine Colossus, which was at one point or another a hotel, concert hall, and amusement bazaar. 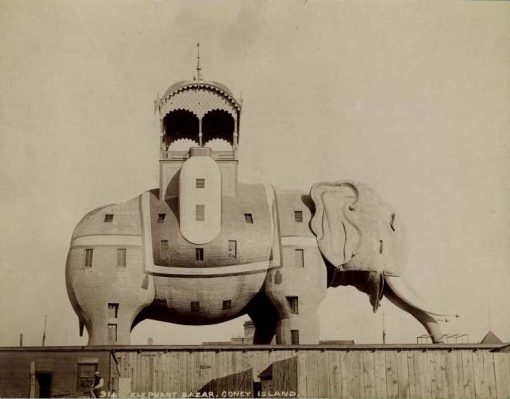 It stood on Surf Avenue from 1885 to 1896, when it burned down in one of Coney Island’s many fires. Though technically it wouldn’t have been around for Elliot to see in the late 1930s, I couldn’t resist paying tribute to our lost pachyderm palace.

The “Suzie” is named after my mom.

You can purchase a copy of Little Elliot, BIG FUN at your local bookstore or any major online retailer. Signed copies are also available from Books of Wonder. You can also visit my website for more information, links, and to check out my other books!